We are working safely during the current COVID-19 restrictions.

Over 900 products in the range

Check out our full range of products available on site today.

We manufacture here in the UK using 100% recycled and 100% recyclable plastic. 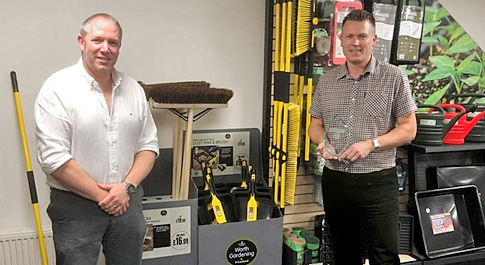 In only its second year as a Garland Products sales agent, James Worby Agencies has scooped the Garland Products coveted ‘Sales Agent of the Year’ award.  James Worby and his team, Ollie Bedborough and Kevin Goodchild, achieved an impressive 89.8 per cent growth in sales of garden care and DIY products in the South East area with still five months of trading remaining in the year.

James is pictured (right) with some of the 25 new products being launched at Glee this year by Garland Products.  Also in the picture is Mark Dedman, Garland’s sales director.

The award was presented at Garland’s two-day sales conference, held this year on 19th and 20th August at Hockley Heath in the Midlands.  The runner-up in the ‘Sales Agent of the Year’ was John Ducker who also achieved a significant sales growth in Cambridge, Norwich, Suffolk, East Anglia and surrounding areas.  Andy Looby, who covers the Midlands areas, repeated his last year’s third placing.

Following the sales meeting, Mark Dedman said: “It has been a highly successful year for Garland Products, and our dedicated team of sales agents covering the whole of the country has played an important part in our continued sales growth.  During the sales conference our agents were acquainted with the new product ranges being launched at Glee in mid-September on Stand D30/E31 in Hall 8.  These include new decorative trellis, a Little Sprinklers watering device, flexi tubs, rotary line cover, bistro set cover, watering can and brooms.  Over 50 other items not previously exhibited will also be on show.  Our new introductions will give Garland an excellent springboard for the 2022 season.”

The Garland Products Group specialises in the manufacture of plastic injection moulded products, all of which utilise 100 per cent recycled or recyclable plastics, including the product’s packaging.  The company supplies a wide range of products for keen and hobby gardeners.